To the resources for Vulgar Latin on pg. 503 add Adams 2013, although that categorization hardly does justice to Adams's  latest magnum opus.

Review of Language and Ritual in Sabellic Italy

A very long review of my other book, Language and Ritual in Sabellic Italy, by Gerhard Meiser has just appeared in Kratylos 58 2013:33–46.
Posted by Michael Weiss at 8:55 AM No comments:

p. 3. B, 1: The explanation of the sociolinguistic and historical situation behind Sp. cada uno and OFr. che(d)un ‘each’ from Gk. katá is not correct.  Gk. katá in its distributive sense was borrowed into Latin in the 3rd /4th century and appears in the Vulgate (cata mane mane ‘every morning’, Ez. 46.14) and in the Peregrinatio Egeriae (semper cata pascha ‘every Easter’).  It is not particularly associated with Southern France—the idiom is also found in Portuguese, Logudorese, and various forms of Italian—so connection with the Greek of Massilia is unlikely.  There are, however, better examples, which make the same point, i.e that linguistic evidence confirms the presence of Greek speakers in Southern France in Antiquity: For example, Occ. caliourno ‘mooring line’ from Gk. kálōs ‘rope’ and empurar ‘to fan a flame’ from Gk pỹr ‘fire’.  Fr. dôme ‘dome’ borrowed from OOcc. *doma ‘cupola’  (inferred from modern domo) is from Gk. dôma ‘house’, which survives nowhere else in Romance. See Wartburg 1969:18–21 and for dôme Paris 1895.

Shane Hawkins, Studies in the Language of Hipponax 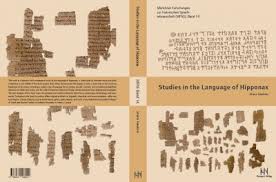 A plug for Shane Hawkins, Studies in the Language of Hipponax.
Posted by Michael Weiss at 7:32 AM 1 comment:

Some corrections relating to Italian and its dialects 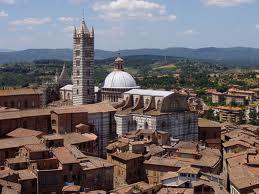 Roberto Battisti alerts me to some problematic/incorrect citations or arguments relating to some Italian and dialectal Italian forms.

p. 130, n. 38: The Italian form giunto is cited as evidence for a long ū before nkC as if from < *iūnktŭm, but this is incorrect. In Florentine Tuscan an *ọ from Lat. *ŭ is raised before an n plus velar, or palatal or before palatal ñ. In the case of giunto, the u probably originates in the present giungere. Cf. Tusc. ungere ~ unto, mungere ~ munto, pungere ~ punto. Southern Tuscan preserves ọ (Senese giọnto). See Rohlfs 1966:91. The best Romance evidence for length before nk are the reflexes of quīn(c)tus which always reflect a long ī: It. quinto, Sp. quinto, OFr. quint 'fifth'.

p. 372 n. 44: I wrote “Standard Ital. venti has borrowed the root vowel of trenta, but Sicil. still has vinti.” but Proto-Romance *i and *ẹ merge as i in Sicilian and therefore the Sicilian form does not illustrate the point. For *vīnti in the Italian dialects Cf. Old Senese vinti, and Venetian vinti See Rohlfs 1966:73.

p. 507: Add Bolognese amiga to the empty cell in the table illustrating the Northern Italian reflex of Lat. amīca.
Posted by Michael Weiss at 2:07 PM No comments:

On pg. 15, n. 34  and in the abbreviations replace OLD with the 2nd edition of the Oxford Latin Dictionary released in 2012.  This edition is now in two volumes for easier handling and the layout and organization of the entries have been somewhat rearranged. The corrigenda have been incorporated. A spot check of the etymological information reveals a disappointingly conservative approach. Nothing appears to have been updated.
Posted by Michael Weiss at 11:54 AM No comments: 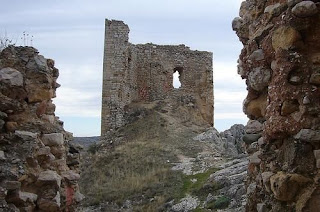 On p. 426 I mention that the archaic disyllabic forms siet, etc. are already archaisms in Plautus limited to line-final position.  But I should also note that siet does show up rarely in the classical period and beyond. For example the formula quod melius siet populo Romano Quiritibus occurs several times in the Commentarii of the Ludi Saeculares in the years 17 (CIL 6.877 in the Hymn to Moerae) and 204 (CIL 6.32329 in the Hymn to Juno) and  in  Hymn to Terra Mater (AE 1935:26). Since this clause is a recycled prayer formula the survival of the archaism siet is not too surprising, but a recently discovered curse tablet from Peñaflor dating to the second half of the 1st century BCE also has the form siet. See. A.U. Stylow. 2012. "Stumm wie ein Frosch ohne Zunge! Eine neue Fluchtafel aus Celti (Peñaflor, Pro. Sevilla)" ZPE 181:149-155.
Posted by Michael Weiss at 8:45 AM No comments: